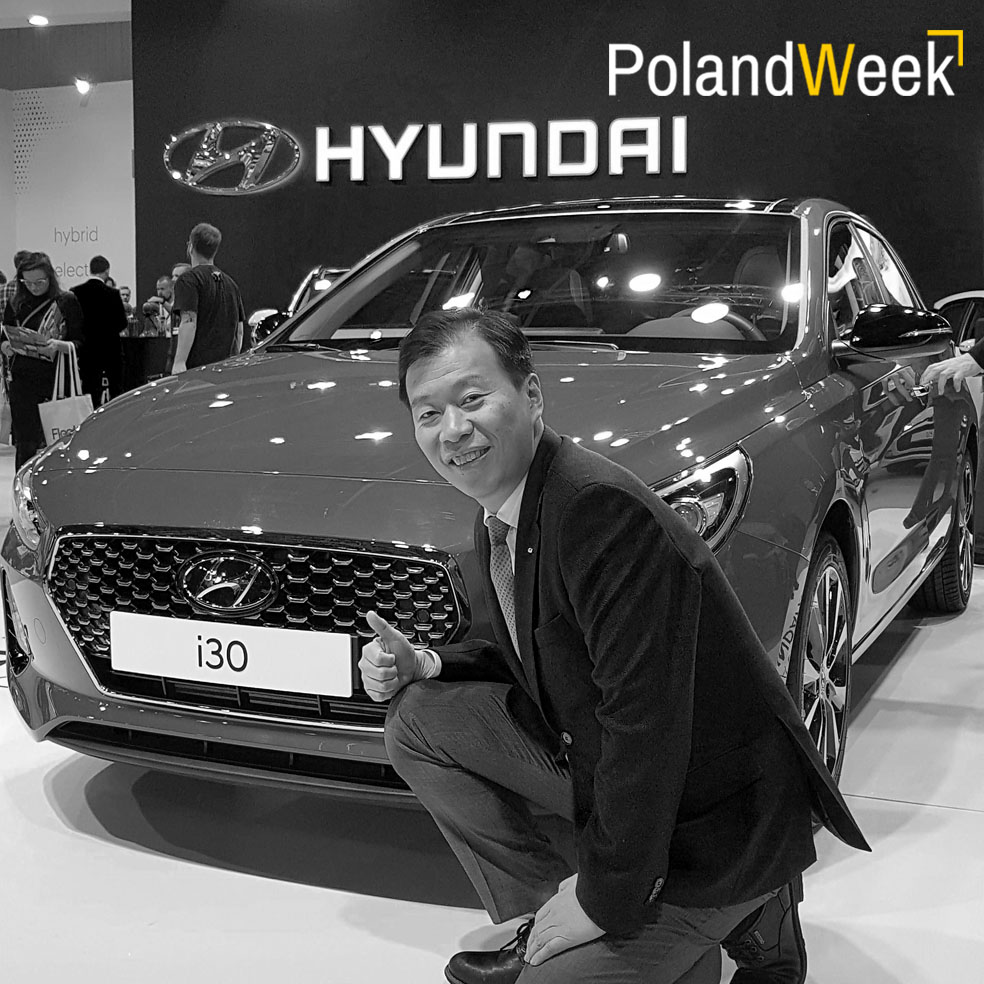 “In the future, global demand will change dramatically due to environmental issues. We have been developing products to satisfy this trend.” – says Sonny Nam, President of Hyundai Motor Poland.

PolandWeek.com: When have the company been established and why?

Sonny Nam: Officially our founder Chung Ju-Yung set up our company in 1967. He started to form Hyundai Motor Company originally in 1948 and then up to Korean Civil War which came June in 1950. Our founder started the business as car repair shop. Then he improved it (until the war broke out in 1950) and then (after the war was over in 1953) established two construction companies. Finally, in 1967 he came again to car business and set up Hyundai Motor Company. It was the official beginning. And I was born in 1967 (laugh).

What happened after that time? Was there a breakthrough in the company’s history? The moment that has occurred to be especially important?

For a new comer to car industry, it was hard to organize car production, especially manufacturing technology. At that time our founder imported technology from Western brands including Ford. And then, we had some partnership with Mitsubishi since we used their technology to start manufacturing cars. In 1976, we started to produce our own model Pony, the first one developed through Hyundai’s own technology. One year later we started to export Pony to foreign countries. The first destination was Ecuador in Latin America.

Where was the first Hyundai plant opened?

How does it look like today? Where is the production located?

Our main plant is located in Ulsan, south-eastern part of Korea since our headquarters is in Korea (Seoul). Taken as one facility, the factory in Ulsan is the biggest one in the world.
Sometime later, we built another factories in Korea and then established other ones in foreign countries – Turkey, Czech, India, etc. We have two factories in China. China’s plant is the biggest after the Korean one and is dedicated to the market.

Let’s talk about Hyundai in Poland. What is the character of your presence?

Poland is the biggest market in Central Europe. Total car demand amounts to about 480 000 cars sold last year (this figure was forecast at that time. It’s exactly 475 935 cars by CEPiK data) that makes Poland important market for us. Of course, Polish market differs from some other Western markets. We do our best to develop each model, which would be nice and suitable for this particular market : value characterized by the corporate slogan “Modern Premium”.

Hyundai cars, which drive on Polish roads comes from which part of the world?

For Polish market, we have three sources: Czech factory, our headquarters’ factories in Korea, and the third one is in Turkey.

Autonomous vehicles, electric cars are transforming the car market. What is Hyundai’s approach towards these trends?

Firstly we want to make ourselves ready for these trends. In the future, global demand will change dramatically due to environmental issues. We have been developing products to satisfy this trend. It takes more time for Poland to have more eco-friendly regulations but definitely, we are ready to follow the global trend. We have hybrid products, electrically driven cars and also we have been manufacturing hydrogen-fueled cars for the first time in the world. We have already introduced a mass production model of such cars.
Regarding electric cars, we already have some concept models, mass production of which has already started. It is called Ioniq and is present in Poland.

It is currently common that car companies establish cooperation with high technology companies, for instance, Toyota or General Motors partners with Uber or Lyft to create fully autonomous vehicles.

What is the most important for the company?

Nowadays we are focusing on nice looking design with proper and safe technology. Essential technologies.

What role does design play?

It is one of our most important goals. Our design center is in South Korea. We also have two branches, of which one is in the US, and the other in Germany because Europe is a big market, almost close to the total demand of the US. We made a step to cope with R&D issues and now we can make cars more European enough to satisfy the regional customers. Design can be slightly different in various markets.
European consumers prefer more conservative design while US consumers want to show off themselves through design. In this regard, we seek to match a unique regional trend.
Europe has its design culture. We have selected Peter Schreyer who is a famous celebrity in the automotive world. Since he joined Hyundai, we have taken a mainstream design philosophy, which is “Fluidic Sculpture” (mixture of graceful lines from orchid). We have applied this philosophy to all our products. Nevertheless, basic design comes from one spirit by the R&D center located in South Korea.

It depends on global economic situation. Some time ago China was the most important because it became the biggest economy in the world and so still now. However, at some point in time, the US market was the most important for carmakers, including Hyundai. Nowadays the trend is changing and we are getting back to Europe because European economic condition is quite stable. Hyundai is totally dependent on global market situation.

Cars are produced in three factories for Europe. How about the rest of the world?

We have nine plants. In the past Korean factory was the most important because we were heavily dependent on Korean domestic demand. However, the world is growing and so is our export accordingly. Approximately, our global capacity is about five million cars a year. 15 to 18 percent goes to Korean domestic market, and 82 to 85 percent goes to global market.

From the global perspective, you are the fifth car manufacturer in the world.

Yes, but including our sister company – Kia. Collectively we produce 8 million cars a year worldwide.

Ecology is of our great importance. We developed hybrid, electric and hydrogen-fueled products with our own technology. In addition, we are trying our best to comply with environmental regulation of each market. It is especially important in European Union. Legal regulations are also getting tougher, but we are doing our best to overcome it and reach less CO2 emission level.

Why did you decide to be a part of the Tour de Pologne?

How do you see Hyundai in 5 years? What is the vision?

Firstly, we have a plan regarding volume – to manufacture 10 million cars a year. In addition to our volume ambition, it is also a contribution to customers with more benefit for them and more elegant and philosophical products.
Additionally, the strategy for Europe is that we want to be the most preferred Asian brand in Europe, which means to be a leader among all Asian brands. We have ecological ambition, as well.
Also in the field of autonomous cars, we are becoming a leader. We have been testing cars, which can run on road. It’s the future that we intend, as well.

What do you like to do in your free time?

Ever since I came to Poland, I decided to be interested in the country in which I live. I discovered that Poland has many interesting artists, writers, and painters in its history as well as contemporarily. I like reading their biographies and also exploring which stands behind their stories. All of Koreans know Frédéric Chopin already. They were excited when the Korean pianist, Seong-Jin Cho won Chopin Competition last year.
Regarding Polish culture, I am also impressed by Polish pottery. I was surprised by its richness of design and diversity. Living in Poland, I discovered local culture that is very different from Korean but equally rich and worth exploring.